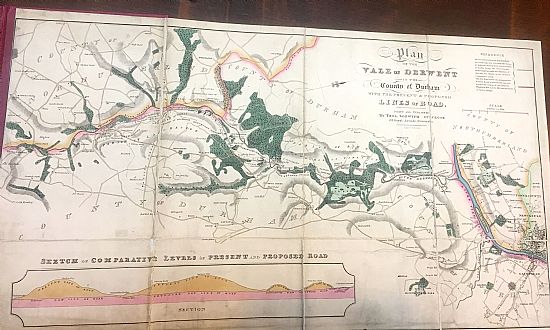 Observations to Accompany
A Map of the Vale of Derwent
In the County of Durham
By Thomas Sopwith, Surveyor

Transcribed from the copy held by the Lit&Phil [D912/1]

General Description – The River Derwent after traversing a great extent of Moorland Country, and forming the Boundary between the Counties of Northumberland and Durham for several miles, falls into the Tyne at Derwent-haugh, about three miles above Newcastle.  The higher portion of the dale is characterized by the dreary aspect peculiar to the Mountain Limestone Formation, which composes the Lead Mining district of the North of England; but in the middle portion of it a more populous and cultivated country gradually opens out, which is strongly marked with a stillness and repose, resulting from its solitary position, and from the want of communication with the neighbouring district.  On approaching the River Tyne a more varied and active scene is presented by several manufacturing establishments, some of which are of great extent and possess many advantages, especially that of a constant and powerful [?id] from the rapid stream of the Derwent. The annexed Plan shows that part of the Vale which extends from Allonsford to the River Tyne, near Newcastle, with the situation of the several adjacent seats, villages, roads, &c. and also of the extensive Woodlands which are situated in it.  Comparatively few persons, even in Newcastle, are aware of the beautiful and romantic scenery of this Vale, which for nearly twenty miles from its junction with the Tyne, presents a succession of views, not only equal but superior to many places of great celebrity for such attractions.  The celebrated Wesley, says, of Newcastle and its vicinity, that he knew “no place in Great-Britain compareable to it for pleasantness,” a recommendation which seems from the context in his Journal, to have been chiefly caused by the frequency of his visits to this Romantic Valley.  The Park at Axwell is one of the most beautiful in the kingdom, and when viewed from Whickham, or from the opposite banks of Tyne, the rich groups of foliage spread over its ample slopes, form a luxuriant foreground to the receding vale of Derwent, the steep and winding banks covered with stately woods, are seen to great advantage.  At Gibside the scenery is of the finest possible description, and presents as great variety of beautiful and romantic views as any grounds of similar extent in the kingdom.  The South front of the Hall is a fine specimen of old English building, the interior enriched with a valuable collection of Paintings, the Column forms a beautiful [monument], and the Chapel is a rare and splendid specimen of Architecture, built from the designs of Payne.  The House and Grounds at Hamsterley, planned by the classic taste of Swinburne, and the wide and thriving forests of oak at Chopwell, belonging to the government, add great beauty to the district, while the rise by the banks of the river afford such varied and delightful combination of wood and water, rocky precipices, glimpses of distant scenery and fragments of antiquity, as to render it deserving of much more attention as a place of resort than it has hitherto received.

Manufactories – Few situations are better adapted for Manufactories than the lower part of the vale of Derwent.  Iron, lead, and coal exist in abundance in or near it, and a powerful supply of water in a rapid fall is at hand for a succession of useful purposes.  Shotley Bridge at one time bid fair to attain great celebrity in Sword making.  The Iron Works at Winlaton Mill were formerly of great extent, and the several Paper Mills, Steel Forges, and other manufacturing establishments in the Vale, clearly evince how well this part of the country is adapted for such purposes.  But Cutlery at Shotley Bridge is almost forgotten, and a few German inscriptions and traditionary accounts alone remain to attest its better prospects.  Winlaton Mill is comparatively a deserted village, and its communication with the Tyne instead of the direct and level line down the vale, is by a mountainous ascent and descent of more than double the distance, by way of Winlaton.  The establishments that do continue to flourish on the Derwent have to encounter disadvantages which nothing but great ability and unwearying perseverance could overcome, and among them may be classed as the principal, the very defective nature of

The Present Roads communicating with the Vale of Derwent. – The principal road of communication from Newcastle towards vale of Derwent is a very steep, circuitous, and inconvenient ….erable distance from the heart of the valley, which is approached from thence…..and precipitous lane,,, parts of which are so….foot passenger….a cart or other conveyance………the very edge of the sharp ruts which are in some parts worn into the solid rock.  Such are the communications on the South side, and the opposite banks are, for an extent of many miles, almost entirely destitute even of this miserable kind of accommodation.  Leaving the Post-Office of Newcastle, the present line descends very steeply to Tyne Bridge, then climbs a yet steeper ascent to Gateshead, and so continues rising to the summit of the Wind Mill hills.  It then falls to below the level of Tyne Bridge, rises towards Whickham, and after passing a very undulating surface gains a lofty eminence at Marley Hill:  from hence it descends to Burnop Field, and then sinks by a long and steep descent to Hamsterley Bridge.  It continues to Shotley Bridge, by passing over a very elevated ridge, the ascent and descent of which are at all times both difficult and dangerous, and in winter exceedingly so.  From this road to the village of Ebchester is by Cut-throat Lane, a deep and narrow pass of the kind already described.  The road to Lintz Mill is of a similar description, and hence the most important and fruitful part of the vale is completely shut out from those advantages which would naturally flow from an easy intercourse with the adjacent trading and manufacturing districts.  The promotion of agriculture or manufacturing improvements is in a great measure prevented by the powerful obstacles thus caused, and property so secluded from the rest of the world possesses much value which must remain dormant until the intersection of the district, by good roads, affords the only means of calling it into operation.  For what the circulation of blood is to the human frame, conveying life and energy to every part of it, so are good roads to a country, carrying with them the means of present employment and of future opulence, - giving to the retirement and pure air of the country the advantage of a nearer proximity to the comforts and refinements of the town, bringing the manufacturer and the farmer nearer to their market, lessening the wear and tear of carriages, the waste of animal strength, and the needless loss of time, which back roads entail on all who live within range of their baneful influence.  The obviousness of these and similar considerations have long been impressed on the minds of several of the Proprietors of Land in the district, and hence their wish to promote so very desirable an object as an

Improved Communication up the Vale of Derwent. – In order to ascertain the practicability of effecting a material improvement in the roads of this district, Messrs. Wilson, Annandale and Burns? Caused a survey to be made, in order that a map of such projected improvement might be submitted to the several gentlemen interested in the adjacent property.  For this purpose they engaged the services of Mr. LUKE PEARSON, an able and experienced Inspector of Roads, and Mr. SOPWITH, Surveyor, who were instructed to examine the district, and to select whatever line should seem best suited for the Public convenience, without reference to any other object whatever.  A proposed line of road has since been projected and surveyed, and the result is such as to fulfil the most sanguine expectations as to its practicability and the great improvement which may be effected.  Mr. Pearson has carefully levelled the line and reports it to be as follows:-5 miles are nearly level, 3 miles under 1 in 66, 1 ¼ miles under 1 in 33, and 1 mile under 1 in 22.  The Estimate for which is: For making the Road and Fence, £7656. 13s. 6d. ; Bridges and Small Arches, £1433.6s. 6d.; Purchase of Land, Houses, &c, £2163? Building Toll=Houses, Gates, &c. £200; being a total of £10,940.

This calculation has been carefully made by Mr. Pearson, whose experience and acknowledged ? in his profession render it entitled to the full reliance of the Gentlemen interested, and this expence, there is every reason to hope, be lessened by many of the Proprietors giving the Land, so that as an amount of about £10,000 may be considered the probable expenditure of this useful undertaking.

It has been attempted in this hasty sketch to convey a general idea of the proposed line of road for the Valley of the Derwent.  The tolls on the present road afford a sufficient hope of renumerating the expence of constructing a new one, and it is most reasonable to suppose that so important an opening into an extensive range of manufacturing, farming, and mining districts, will effect an increase in the intercourse of these places with Newcastle, which is now so much obstructed.  [The] fortunate circumstance is, that while the proposed line passes in the most advantageous manner near through the several principal properties on the line, it in no instance interferes with the beauties of grounds and plantations in the line of its direction at Axwell, Gibside, Hamsterley, Chopwell, &c. a means of adding to the value of these properties, and of promoting the general welfare of the district it is trusted that the project will meet with that support which it so much merits, and be followed by the favourable results of which a well-founded and strong conviction rests in the minds of the promoters.